Watt’s it all about?

Yes, it’s been years since I’ve last written.  No, I have NOT returned to paddling…but I have been interested in writing a short article about power, metering, and paddling for a while now.  Since largely leaving the paddling “scene,” I’ve fallen (quite literally, at times) back on road cycling to maintain some semblance of physical fitness.  For those of you looking for a great way to cross-train for aerobic fitness, I highly suggest it.  Not only do you not need to wear a PFD, but you get to see the scenery actually change through the workout in a shorter period of time if, say, you rode at 16+mph for over an hour.  But I digress.  A few years ago I bought a time trial bicycle (you know those weird “triathlon” bikes with the T-shaped aero bars and the oh-so-awesome solid rear disc wheel?) and tried to work on getting better PR’s during a 10-mile oval ride.  The bike was aero and fast but I found I had a hard time pacing such a longer event.  The first 4 miles would be pretty good feeling, the second would be terrible, and I had a 50/50 chance of giving up during the last 2 miles to the finish line.  I ended up getting a pedal-based power meter that could show me my real-time power output.  Not only was it helpful to know my performance in the moment, but also was a great tool to help me pace the event and develop a better internal “fuel gauge.”

My ride experience is explained by a term called Functional Threshold Power or FTP.  FTP is defined as the average power (or work done over time) for an hour-long, best effort.  The reason for this has been explained that above your FTP wattage, your muscles will start to accumulate more lactate than it can clear, resulting in progressively lower performance.  At or below that FTP level, your muscle is utilizing oxygen as its main fuel source at least as much as anaerobic fuel sources, which means it’s more sustainably fueled.  In cycling and other endurance sports where power meters are more normally implemented, FTP tests can be performed using hour-long or even 20 minute-long sessions.  While most dragon boat races are a great deal shorter than an FTP test and rely more upon anaerobic energy sources, IMO FTP is still a relevant metric to know in terms of pacing an effort for sustained and consistent performance.  It basically boils down to: paddling at your FTP will get you within PR territory for a 20 minute effort and going harder will mean you will fatigue sooner.  As an experiment, I’ve tried multiple consecutive efforts on the same day with adequate rest between bouts using 1) a stepped, progressive power output in, say, 3 phases 2) just holding X% greater than my FTP for the whole thing and 3) going a bit too hard early on and then trying to hold out till the end.  The results?  I found that my average power output was about the same for each attempt and the finishing times were very close as well, despite very different power profiles.  This may support what you may already understand as an athlete, that there is a give and take to your performance during a race event.  Burn out early, finish weak.  Ease up between start/power sets and have some in the tank for the finish.

How does paddler power output manifest in team performance?  In sports where quick acceleration can mean the difference between winning/losing, power to weight ratios can be a priority, meaning high power and low weight is better.  In a 500m race, the only critical point of acceleration is during the start as typically hull speed doesn’t vary that much for the remainder of the event.  As dragon boats plus crew are generally heavy and water resistance is a major resistor to hull speed and acceleration, I’d say that power:weight is not a priority for dragon boat as it would be for, say, crew or OC.  So what?  It means that a crew that is heavier but who can pump out more watts during the first 30 or so strokes will likely beat the crew that is lighter and less watts.  High power output is important for the start and in any phase of acceleration (ie power sets and finish, if your race strategy utilizes them).

How do you produce more power?  Since power is defined as the work being done over a period of time, there are 3 immediate methods assuming your technique is efficient: paddle the same effort but at higher rate, paddle harder per stroke at the same rate, or paddle harder AND faster.  This is primary explanation for when you see multiple boats with very different technique and/or paddling rates racing neck and neck.  They are all travelling at about the same steady velocity, which requires approximately the same power output to overcome hull drag.  The winning team presents, at some point during the race, a better average power output.  This is where paddling fitness and efficiency come into play.  You may make the right number of watts but have poor technique and or poor fitness which makes it unsustainable and lowers your average output over the race course.  As far as which of the 3 methods to producing more power should be emphasized, I would say paddling harder at increased rate is the way to go.  It’s probably what comes naturally anyway, but the pitfall is that amateur paddlers will decline in paddling efficiency/technique in this situation (how many racers look composed and efficient during the finish at YOUR club regattas?) likely resulting in less power boost than desired or even less power altogether.

Practical suggestions to developing this on the water would be to gradually bring the boat up to whatever effort/speed the crew feels to be a competitive race pace.  Practice bumping the effort per stroke and allowing the rate to “naturally” build.  Hopefully you are seeing the boat speed increase.  You can explore the crew’s red line in the same manner by practicing a maximal (but best technique) effort with race pace as the starting point.  At some point there will be a plateau in speed which reflects the crew’s fitness and technique limitations.  These drills, along with how your crew feels during/after them and if they can actively recover while still holding race pace, can be a “match” you can decide to burn during a race.  The more fit your crew is, the more matches they can afford to burn during the race as the situation calls for before overall performance drops.

As far as physical training and fitness goes, I still see many paddlers putting a lot of time in power lifting and into gaining muscle mass by lifting weights.  Power lifting and hypertrophied muscles can help your power and strength, but the pure anaerobic nature of these activities means you are developing the physical abilities that will likely ONLY HELP DURING THE RACE START.  Yes.  You read it right.  If you haven’t heard it before, allow me to bust a myth right now.  You don’t need big muscles to race well in the sport of dragon boat.

This is where the article comes full circle and I applaud you for making it this far.  Maximizing power output over events lasting greater than several seconds relies heavily on the athlete’s ability to utilize aerobic, NOT anaerobic, energy sources and metabolic systems.  Back to cycling, an olympic-level, male track cycling sprinter may weigh 200+ lbs and put out 2200+ watts for a handful of seconds because that’s what their event calls for.  Contrast that with a male pro road cyclist who weighs 150 lbs but is able to sustain 400+ watts for over an hour.  To put those watts into perspective, an average person would struggle to make even 800 watts for 1-2 seconds on the bike.  The ability to sustain high amounts of power for over several seconds is not developed by lifting weights or power lifting.  It’s by training longer duration efforts at the desired power output. 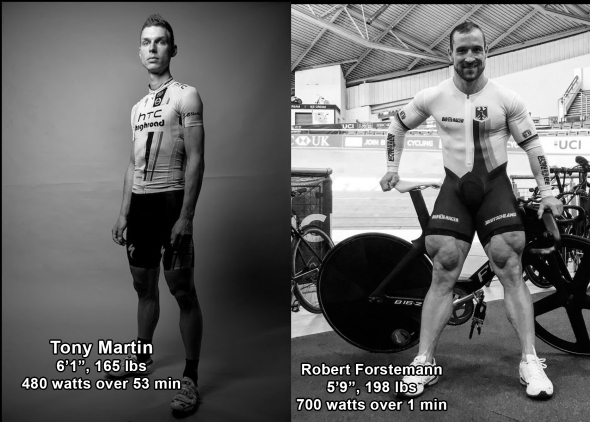 What does that mean for best training carryover?  There’s no replacement for water time and aerobic training should be a priority for paddlers.

Disclaimer: This article isn’t about slamming weight lifting or power lifting or any other form of cross training or off-water exercise.  Anything that improves your fitness can help paddling performance.  The goal of the post is to explore the role of power as a tool for performance measurement and what training can translate to better power output on the water and biggest performance gains when racing.

This entry was posted on May 23, 2019 by Geoff. It was filed under form & technique, Health and Fitness, resources .